Senior on his way to National Junior Science and Humanities Symposium 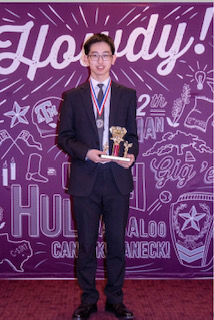 Ethan Zhou at the Texas Junior Science and Humanities Symposium with his award.

Allen High School senior Ethan Zhao recently won third place at the Texas Junior Science and Humanities Symposium and is now en route to the national competition in April. Zhao entered the environmental science category and won first place with his idea for a material he calls aerogel.

“This material cleans up oil spills and there are plenty of other applications but we found a way to cut the cost in half from current procedures,” Zhao said.

Zhao said he was inspired this summer to work on a project for the science fair.

“I just didn’t have anything to do over the summer,”  said Zhao. “So I cold-emailed professors to try to carry out my idea and I eventually found one.”

Zhao dedicated a majority of the summer working on his project at the University of Texas at Dallas with a professor to perfect his idea and he continued to tweak his project during the school year.

“I have been working full-time over the summer since around June-ish,” Zhao said. “So this was around three months, 40 hours per week and now I usually go back to the lab bi-weekly.”

The aerogel is now patent-pending by Zhao to secure his work and protect it from competitors.

Zhao has had an interest in science since childhood sparked by visits to museums and viewing exhibits. He decided to enter the science fair and follow his own footsteps.

“With the science fair it was mainly, I just didn’t have anything to do over the summer,” Zhao said.

Zhao is also a member of the science club, sponsored by chemistry teacher Sandy Kulkarni, who said she is very happy for Zhao. Kulkarni said the science club has been active since the late 2000s and has inspired many students to pursue careers in different fields of science.