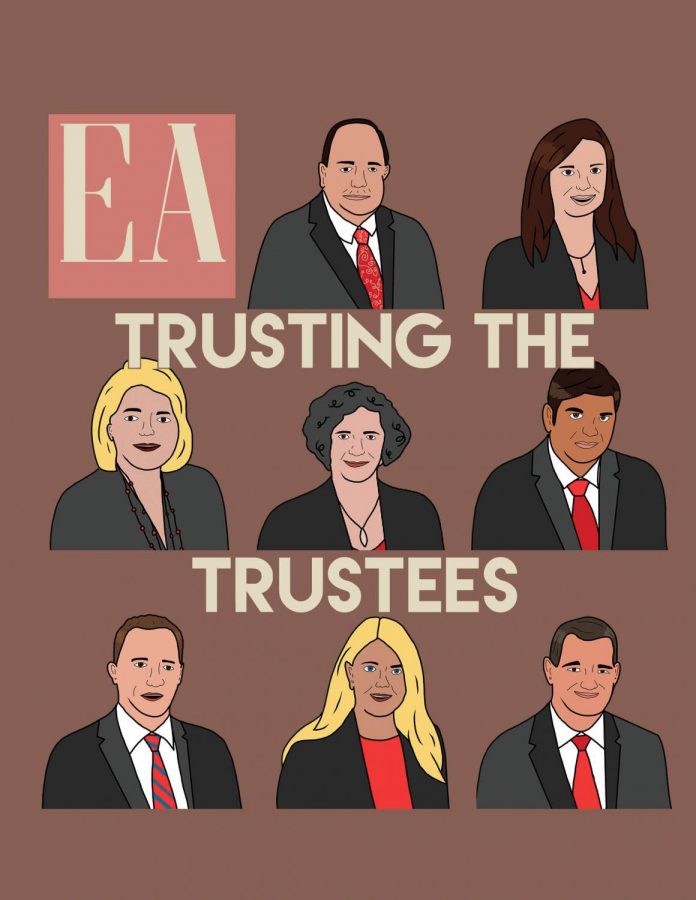 Introducing Allen ISD’s Board of Trustees, viewed by many as some of the most elusive yet impactful members of education in Allen. Together, they work to uphold “The Allen Way” and make Allen a place where “Eagles Soar.” These ideals are used by the board to describe what makes Allen special and communicate the district’s vision statement.

“We don’t have any direct management of the school district, but we have oversight,” Master said. “The best way we make Eagles soar is [through making] sure teachers have the resources, facilities and technology they need to make sure kids can learn.”

Several members of the board identified selecting a superintendent as one of the most difficult processes. Master says the reason it’s such a difficult decision is because it is important to pick the right person.

“Everything comes down from the top, so it’s very important you pick the right person, and that’s always something we take very seriously,” Master said.

Rowley said she also discovered the difficulties of selecting a superintendent, albeit much earlier in her career.

“Within a month of being elected to the board, I get a call from the existing superintendent saying that he’s leaving, so one of the first big things I had a say in was the selection of a new superintendent as a brand new board member who had no idea what she was doing,” Rowley said.

Niven assumed his position as superintendent in January of 2017. During his time as superintendent, he has established a video series called “The Allen Way” where he directly interacts with the schools.

“I had heard the term ‘Allen Way,’ talking with people and talking with administrators,” Niven said. “I wanted to get the definition of what the ‘Allen Way’ is. It is the way we as a district choose to do business, with the strong traditions we have, taking care of people, treating each other respectfully, and taking care of students needs.”

The “Allen Way” as a concept refers to Allen’s legacy as an award-winning district. Master emphasizes the importance that state titles, National Merit scholars, and the core feeling of a small town play in defining the “Allen Way,” while Gnadt emphasizes maintaining a community that values students first.

“I think one of the things we focus on is how to make a generational impact, so when students come through the school district and through Allen, they’ll be able to reach back and say, ‘you know what? I benefited greatly being in Allen,’” Montgomery said.

Montgomery said his priorities center around creating an environment and culture of learning by fostering a community that wants what’s best for students along with equipping teachers with the tools, facilities and resources to fulfill that potential.

“We’ve got to have that stability in order for the classrooms to succeed,” Montgomery said. “We’ve been very fortunate that we’ve got a community that’s able to support them and continue to grow forward and provide that quality education.”

At their board meetings, often on the fourth Monday of the every month, the board as a whole makes all final decisions regarding school district priorities, policies, personnel, textbooks, expenditures and growth management. Aside from that, the members are all a part of different committees.

“We all serve on several committees, so each of us serves on either an audit committee or an advocacy committee,” Master said. “[Mitchell, Ramanathan and I] are the advocacy committee this year. Our primary responsibility is to come back to the board with some ideas on how we can get the community involved.”

Ramanathan says the advocacy team’s job is to tell their story to the community. Although board meetings are open to the public, the board also often uses the district’s resources and projects to exemplify their progress within the community. One way the board does this is through the stadium’s press box.

“We bring a lot of people up during football season to see a football game and hear about all the great things kids are doing on Friday night and during the rest of the school year,” Master said.

Community involvement is most clearly represented when the board carries out new projects such as the SOAR Project, STEAM Center or Career & Technical Education Center, where members of the community can be active in Allen ISD as well as give their opinions on what the board may be doing. A position on the board is not without its challenges, due to the extensive concerns the community may have. Board members say that some of the biggest difficulties they encounter are redistricting and building developments, considering both often cause an outcry from the community.

“Redistricting is really tough,” Master said. “When you have to tell a family they’re going to have to go to a different school, even though all of our schools are fantastic, people are sad to have their kids leave their friends and get to know new teachers and administration.”

Despite any issues the community may have with what the board does, according to Master, it is often resolved and the community gives valued advice and help to the school district, as seen through the SOAR project, a volunteer-based committee made up of community members. Rowley, in addition to being a lifetime PTA member, plays a key part in the leadership committee organizing the interests of the community and the administrators.

The committee is comprised of 24 members including business representatives, parents and residents of the community. Together, they study the future facility needs of the district to determine how to best maintain Allen’s standards.

“This might include adding a new agriculture building, making some renovations, expansions for the high school, or building the STEAM Center.” Gnadt said.

While the SOAR committee proposes ideas such as renovations or the new Lowery campus to the board, the decision ultimately lies with district voters in the annual bond election, which is currently scheduled for May 4. Past bonds approved by the community have led to the construction of facilities including Eagle Stadium, the STEAM Center, and the planned Career & Technical center for dual credit students, which Niven said he hopes will expand Allen ISD’s partnership with Collin College.

Niven considers continuing Allen’s collaboration with Collin College to be one of his proudest accomplishments as superintendent, along with opening the STEAM Center.

“Participating in that and seeing it open now has made me proud to be part of that and part of the team that’s put it in place,” Niven said. “The cool part of all of it is when you see the STEAM Center and Collin College together. I think there’s going to be some great partnerships we haven’t even thought of yet.”

“My goal is that we look in the best interest of the students as they graduate and move forward and make sure that they are successful and have a continued level of success,” Niven said. “That’s what I’m focused on.”

Master and Mitchell said that their work ultimately comes to fruition when they attend graduation. To them, seeing students earn their Allen High School diploma means that they are prepared for any career path.

“You’ve been exposed to things that are [going to] make you successful and make it easier on you when you go onto college,” Master said.

According to Master, the members try to participate in the mission of becoming a lifelong learner, which they also want to instill in the students as they prepare to soar.

“Even the board is continually learning and growing, and that’s amazing,” Ramanathan said. “We get to work with other dedicated people who want to make sure the kids who go through Allen ISD are prepared for life.”

However, the position is not without its challenges. As mentioned, choosing a superintendent can be strenuous, but board members also recount difficulties regarding redistricting and building developments, which both can cause public outcry.

“Putting the service center where it is currently located was a huge challenge for the school board back when that was proposed,” Master said. “There was a lot of opposition and a lot of people coming to the meetings and protesting. Once it was built, I think that even the surrounding neighborhoods were happy with it.”

Early voting for the May 2019 election will take place April 22 – 25, with election day Saturday, May 4. In addition to the election of board trustees, the ballot will also be featuring a $422,800,000 bond proposal which features funding an agricultural science center, renovations for elementary and middle schools, and transportation which includes the purchase of 35 new buses. The bond would also include safety measures and upgrades to technology in the classrooms.

All board members except for Master plan on running for reelection. She said she believes that next year it will be time for her to pass the baton to someone new after 12 years on the board. However, Master said she knows the board will be in good hands once she leaves, able to continue bettering Allen schools.

“It’s time for someone else to step in,” Master said. “I’m leaving it in fantastic hands. The mission statement says to be a lifelong learner, and we all want to do that. The board is continually learning and growing, and that’s amazing.”

As the board continues to grow and change, all said they hope to continue to have a positive impact on  Allen ISD.