Paws for a study break 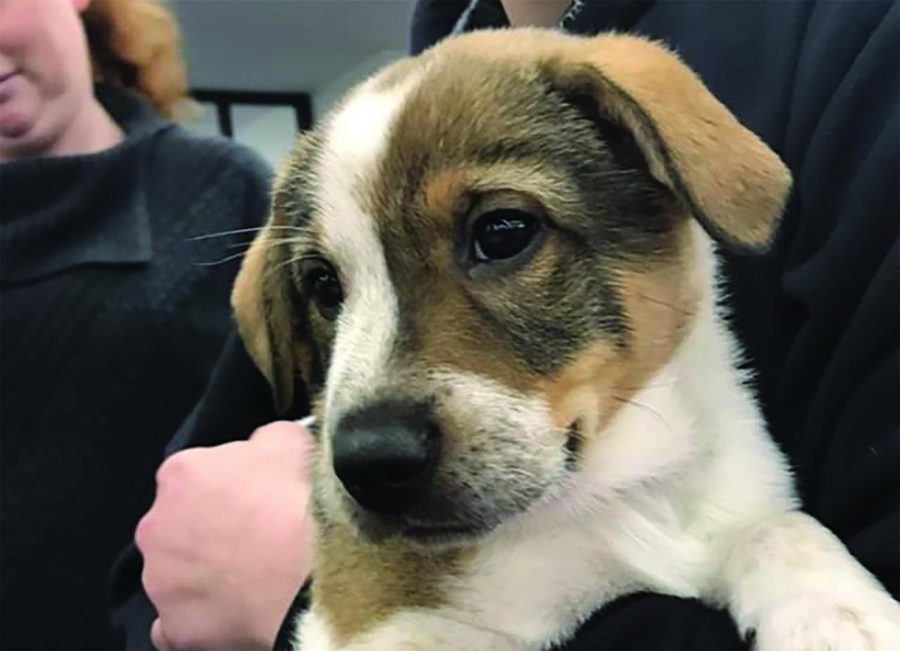 After the stress of a long school day, some people believe that there is nothing more needed than a relaxation session. During a summer college visit, sophomore Lauren Miracle and her triplet sisters Danielle and Sydney were inspired to incorporate an interesting way to unwind from their tiring school experience. They discovered that one of the best ways to help students take a study break was to bring in man’s best friend — puppies.

“We were going on college tours this summer and at the University of California Irvine, they had this program where you could go and play with a baby corgi,” Lauren said. “We thought that was really cool.”

After visiting the college, the sisters introduced the idea to Allen. Counselor Jennifer Atencio welcomed the idea and sent them in the direction of staff member Blair Benter, who frequently fosters puppies and works with a rescue outside of her job. Benter decided to sponsor this club, Paws For A Study Break, and Lauren later assumed the title of club president.

“The Miracle triplets were very interested in trying to start [a program] here because kids get stressed,” Benter said. “Everybody needs a break and dogs are proven to help alleviate stress.”

Benter said that the advantages of having the dogs at school are shown visibly in the reactions of the people who interact with them as if the stress is physically leaving their body. Many dog-loving students can come to see the dogs as a universal stress reliever.

“There is nothing quite like coming in and visiting with a dog when you’re stressed out,” Benter said. “I know that I’ve had kids from different classes, past kids, and special needs kids come to my office and try to visit with the dogs when I have them, and it’s really something to see. You can visually see how the stress just kind of melts away. All you have to do is touch them. You don’t even have to hold them. You can just put your hand on the puppy and that just makes it better.”

Students aren’t the only ones who benefit from the dogs. Many teachers also interact with the puppies after a rough day when they need to de-stress. According to Benter, dogs can always be there to comfort anyone in any time of need.

“I have teachers that’ll come in that have had a really bad day,” Benter said. “I have one that sees me and she witnessed something that was kind of traumatic so she’s a little shaken up by it. I can tell you right now when she walks in next, she’s going to hold that puppy and you’ll see her shoulders drop and you’ll see a big relaxing sigh. You’ll literally see her whole body posture change.”

Surprisingly, these interactions are just as beneficial for the puppies. They require socialization in order to get used to unusual senses they may encounter in a new home, so being with students and teachers introduces them to new experiences.

“Socialization usually occurs for dogs within five and 11 weeks, so you need to get them associated with other dogs and people,” Benter said. “When I bring them up here, they get used to all of the sights, sounds and smells that happen here. They encounter the fire alarms, the lockdown drills, and the bells going off, all of that. They get super socialized because I have the students that play with them during the day and then I have teachers that play with them in the morning and in the afternoon before I leave.”

Once the weather warms up, they hope to have meetings outside with the puppies, possibly in March and May. Benter said she especially wants to have puppies during AP and IB testing, an often stressful time for students.

“We are planning to do an event, and we’re hoping as soon the weather gets a little better we can do it,” Benter said. “Unfortunately, Texas weather is killing us right now. We’re trying to get inside, but right now we’ve been told we have to stay outside. It’s a school policy, but we’re trying to work around it. We’re hoping eventually that we can maybe do it in the Black Box Theatre by putting some tarps down and having people bring dogs. But right now, we’re going to see in the spring. We’re hoping to have some for AP and IB testing so those kids can come and have some puppy time.”

Benter and Lauren hope to improve this club in the future with incorporating more rescues and setting up events that can help raise for these different rescues.

“We had somebody come from Dallas DogRRR and they talked about how many dogs are in shelters and rescues and what it’s like working for a shelter,” Lauren said. ”That was really informative so we’re trying to improve communication with other shelters to set things up for the future.”

Benter believes that Paws For A Study Break has the potential to be a great club for the school to have because dogs will always be there for people, no matter the situation and no matter the day. She said if anyone ever needs to breathe easy, they can visit the dogs and find peace with them.

“Dogs aren’t here to judge you,” Benter said. “We don’t deserve dogs with all of the stuff they do for us. They’re amazing and I can’t imagine not being around them. When someone is with a puppy, you can tell that the stress of the day is just kind of gone, because that’s what dogs do.”