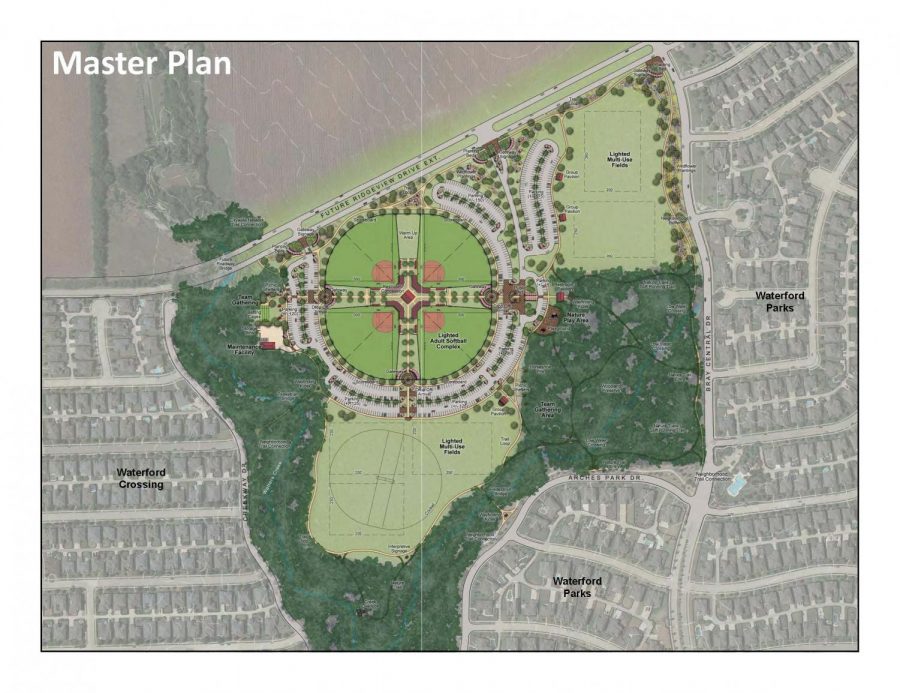 From a bond election in 2007, to a master plan in 2013, a new park on the west side of Allen is scheduled to open by fall of this year. The park addresses the need for a large community park west of US Route 75 and will have a variety of amenities including a softball complex, multiple open fields, a playground, and 25 acres of preserved wooded area complete with various trails.

Spirit Park was first proposed in 2007 as a way to build complexes that were specifically for adult athletics. With funds from bonds, and grants from county and state organizations such as the Collin County Parks and Open Space Funding Assistance Program and Texas Parks and Wildlife Outdoor Recreation Grant, the Allen Parks and Recreation Department was able to allot 75 acres for the construction.

“It takes a master plan, as well as design development and detailed construction drawing phases that take years to get through,” project and grant specialist Kelly McGinnis said. “It’s not just residential support, but also Collin County and the state of Texas.”

While the softball complex was constructed with adult athletics in mind, project manager and landscape architect Matt McComb said it will be open to all ages, and the fields are planned to be used for baseball as well.

“There is the possibility of baseball with some unique mound systems that are going in, but there’s going to be other components,” McComb said. “There’ll be a playground, some enhanced landscaping like the pollinator garden, and the trails.”

According to McComb, the playground will be near the softball complex and the preserved 25 acres, and it will be uniquely built to be a child-friendly environment exclusive to Allen. Furthermore, the pollinator garden will be the connection from the complex to the children’s playground that will be made to promote native plants and wildlife.

“It’s going to be another park within the park,” McComb said. “It’s going to [teach] about native plantings, drought-tolerant plantings, and how those function as pollinators to help with hummingbirds and honeybees.”

The park will also include open fields for other sports like cricket, lacrosse and soccer, which will be available for tournaments and free-use.

“We need the support for our growing adult athletics,” parks superintendent Kim Spearman said. “As we get past the grand opening, we are going to be hosting quite a few tournaments there.”

Allen residents also had a chance to be involved with the park’s construction as the city plans to implement public art throughout the park and its infrastructure. According to McComb, Spirit Park will contain three levels of art: freestanding art, integrated art and functional art, such as signage for the plants, benches and bike racks.

“It’s a very public process, and it involves advertising and a call for artists and [giving] them some framework for what the site is,” McGinnis said.

McComb says that the diversity, uniqueness and spirit of play imbued in the park’s construction play off of each other to create a special package.

“I think Spirit Park is a different complex than [what] we’ve built before,” Spearman said. “We’re doing a lot of different things with this complex that we’ve not done before, and we’re excited about the opening of it.”